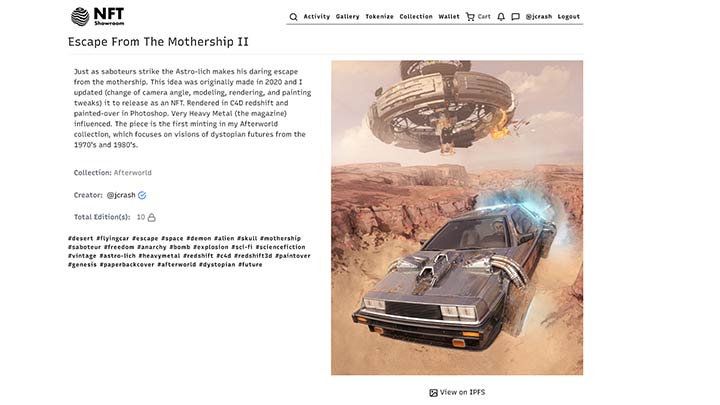 My Genesis NFT drop will be on the hive blockchain at the NFTShowroom.com. I chose this gallery first and foremost because it is ecologically-friendly and has low transaction and minting fees. It doesn't solve all the problems with cryptoart, but I think it's a good start.

My ideal NFT gallery would just use blockchain for the tokenization and be able to buy NFTs with a credit card or cash and not use cryptocurrency for the transaction. If a gallery like Makersplace for instance used Hive blockchain instead of Etherium that might be the ideal gallery because they allow credit card sales. But right now Etherium, for me, has too high of an environmental cost even though it has been exaggerated on blogs and social media, it has a high toll that I'm not comfortable with. While I'm not thrilled that crypto places the burden of the transaction fees on the backs of the buyers and alleviates the pain points only for the marketplace it's still the best way for selling tokenized digital art.

So without further ado, here's my Genesis NFT drop. Limited edition of 10 and for every one I sell, I'm giving one away to encourage collectors to give Hive NFTshowroom a try. Comment to enter. You'll need a Hive & NFTShowroom Account to receive it. If you'd like to try out Hive on NFTShowroom and help me out as well you can use my referral link: https://nftshowroom.com/?r=jcrash

Just as saboteurs strike the Astro-lich makes his daring escape from the mothership. This idea was originally made in Sept. 2020 and I updated (change of camera angle, modeling, rendering, and painting tweaks) it to release as my Genesis NFT drop. Rendered in C4D redshift and painted-over in Photoshop. 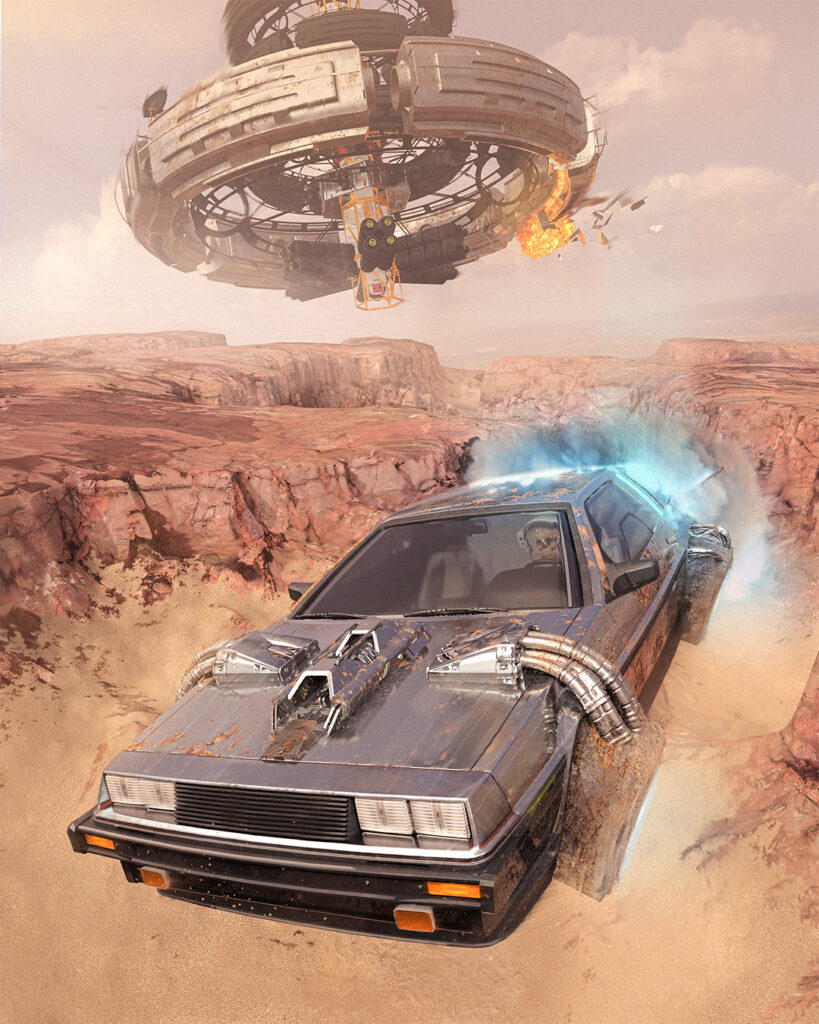 I've been making art for as long as I can remember. I started with drawing haunted houses in preschool, but we probably don't need to go that far back. I had formal training at Columbia College Chicago and was a student of Pat Olson, Eddwin Meyers, Mario Castillo, and Hollis Sigler. At the time I was interested in Pop-art, Pop-deconstruction/revisionist, figure painting, and illustration. I also took several photography classes when I was there. That was a minor for my illustration major.

When I left Columbia I worked as a photographer for Apartments.com and several portrait studios before I hit some dead ends. Then I went back to school to learn Flash and motion design at SAE Byron Bay, Australia in 2004-2005. I studied with Ramon Rivero 3D animator and digital artist from Lord of The Rings, Contact, Meet The Feebles fame. after school part I interned at ARC worldwide/ Leo Burnett and then worked my way up the position of a senior motion designer. I was there for 7 years and then left to freelance and start Attack Studios. I've been doing that for the last 8 years, for a grand total of 15 years working in the motion graphics field.

The piece is the first minting in my Afterworld collection, which focuses on visions of dystopian futures from the 1970s and 1980s. I feel like last year was a rough year for a lot of people, myself included, and for whatever reason, I was drawn back to this retro-futuristic imagery. Growing up that was a comfort zone so there's a lot of warm fuzzy feelings attached to that. So right now I'm exploring just what that connection means to me. I think it was a way of making something that I was familiar with, had a genuine passion for, and that I could have some control over. Because everything was out of control in 2020.  We were all challenged that year. Mentally, physically, emotionally, and spiritually. Relationships and friendships were strained. It was very taxing.

I started making work in this style in September of 2020 and just started trying to climb out of this pit of despair I had fallen into. There were no intentions of making any money or really even attracting any client work from it. Made it for myself because I needed to feel excited about something again. I'm interested in exploring visual narratives from different worlds, timelines, and/or dimensions. Mash-up of cosmic horror, fantasy, and sci-fi. I focus on the pivotal story moments where everything changes. It's about connecting these moments to emotion and bring a sense of wonder, excitement, and imagination to the viewer. Just like it did to me when I was making it.

The imagery comes to me first. Sometimes as a vision/idea, sometimes as a dream, sometimes as a feeling. I write it down and I'll make a really quick sketch or diagram of a composition or lighting. That's how it starts and usually, I'll collect a few of these ideas before I start on any given one. That just helps with my workflow.

I like to have a lot of options available because sometimes I'll think of an idea beyond my skill set at the time and have to shelf it for later and stick to the one I know I can mostly pull off. I just want to make them a reality to the best of my ability but also get them out to the world in a quick way. That's why I've landed on exploration with 3D art. It's fast to iterate and design in. I can source models online for free and for what I can't, I'll model on my own or purchase additional models. This gives me the ability to jump right in and hit the ground running. I can work fairly quickly in making it look good and believable.

Right now I am teaching myself Zbrush so I can contribute more to the modeling, and art direct more holistically from the beginning. So that way I have a bit more ownership over the creative process going into this. Instead of just model kitbashing, photoshopping, and painting over it.

Texturing, lighting, and composition all start in Cinema 4D. Sometimes I'll hop into a special texturing program like Substance Painter to get a little more exact in the texturing process. For environments, I'll use World Creator or Cinema 4D and some sculpture tools. It depends on what I'm creating. I'll use Embergen for volumetrics like fireball explosions and such.

For me, the painting process has to do with putting my mark on the 3D render and helping the narrative. I'll simplify certain elements that are a bit too busy for the composition and just paint over to reduce the contrast. Other elements will get refined and have more detail added, things that I couldn't figure out how to do quickly in 3D. It's about putting more personality into the render, more expression, and emotion into the piece. Sometimes a completely 3D render looks too perfect sometimes and I can paint some humanity into that.

Also by this time, I'll have a pretty good idea of what the work is about. When I'm working in 3D I just have the notes and sketches to guide me, but by the time I'm doing a paint-over, I'll have had some time to process what the imagery means to me. So then I can amplify or reduce things and make the final color grade that reflects the emotions that the work touches on. 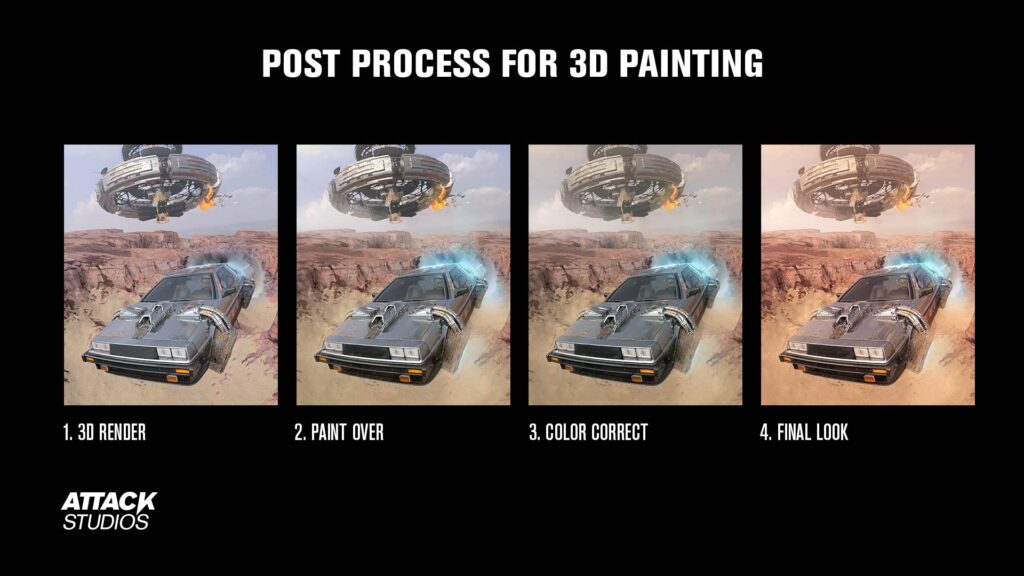 When I first did some of these pieces I had an oil canvas texture that I brought in I thought was cool because it was so much like the trade paperbacks I was looking at looking for inspiration. I realized that it was veering off too much into skeuomorphism. There wasn't any real practical purpose or even really a real aesthetic reason to put that canvas texture in there. It was too much like I was making fake paperback covers which is not my intent.  This is not a satire series, I'm not mocking up fake trade dress paperback graphics. This is not anything that's tongue-in-cheek. These are all just real ideas that I had rambling in my head. They have more narrative and emotional commentary than anything social or political.

After I made a bunch of these, looking back on the collection and started thinking that I could to fanzine or catalog of theses. Hire a writer to kind of help flesh out the storyline for each. I kind of stumbled on NFTs in October or November of last year. Kid Mograph and FVCKRENDER were the first NFT artists that I was following on Twitter. I was interested in it but I needed to research it more. Then a bunch of client work came through and the holidays were hectic. Beeple did his Genesis NFT drop in December last year and then the spot was pretty much blown. His $69.3 million sale of his first 5,000 days collage NFT in March 2021 have started a tidal wave/ gold rush and everyone is minting everything in hopes of making big money.

So I'm a bit late to NFTs, but I'm glad I took the time to research it and all its implications before jumping in feet first. NFTs are straight from the tap digital so you don't have to convert your work to another format. I think that's important because look if you're creating something digitally from the beginning why does it have to enter the physical world for an artist to monetize it? Why can't it just stay digital? Why can't that have value? The provenance, ownership, royalties, hard-to-forge, difficult-to-steal nature of NFTs make it a win for collectors and artists alike. That builds a community of like-minded people all celebrating similar kinds of things, and even though I'm late to the party, I want to join that community and contribute to it.

Why is a Genesis NFT drop called Genesis? It has nothing to do with the bible, but rather the rock band Genesis and their seminal album Invisible Touch. 😉

Well I've been waiting, waiting here so long
But thinking nothing, nothing could go wrong, ooh now I know
She has a built in ability
To take everything she sees
And now it seems I'm falling, falling for her

I'm still learning and researching all the ins and outs of the market. Right now I feel this is the best way forward for a digital artist and is an exciting time to be a digital artist and sell NFTs. It's like being the first people to use sculpture or printmaking. Arguably, it's the first time that there's been a new art format since street art. So to be here during the early years is truly exciting. 100 years from now what will they think of all of this? Will NFTs still exist or will they have been transformed into something else? Only time will tell.

Pumped to see you enter the NFT space!

Thanks, Chas, I appreciate your support!:)