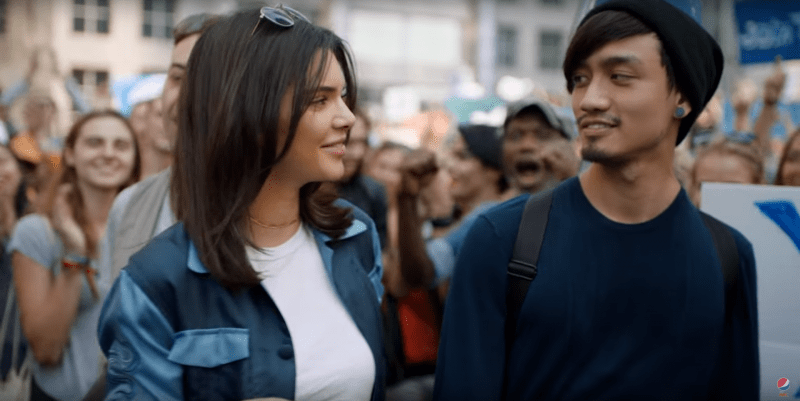 Twitter exploded yesterday making fun of Kendall Jenner's Pepsi Ad. It was a "socially minded" long-form ad that climaxed when Kendall Jenner gives a riot police officer a can of Pepsi during a protest, which for some reason got cheers from the crowd.

It is a play on the 60's flower power where demonstrators gave flowers to riot and military police during the 1967 March on the Pentagon (made famous by photographer Bernie Boston). Unlike the 60's march, the ad was tone deaf and fell flat on its face.

The ad "captures the spirit and actions of those people that jump into every moment," Pepsi said in a statement. "It features multiple lives, stories and emotional connections that show passion, joy, unbound, and uninhibited moments. No matter the occasion, big or small, these are the moments that make us feel alive."
Watch the ad here:

"Same thing basically." -the Pepsi ad wizards who came up with this one pic.twitter.com/dkvYZ7fzk9

I've been studying commercials for 30 years. Kendall's Pepsi ad is legitimately the worst one I've ever seen.

Pepsi just made the commercial of the year for Coke.

Could you be any more blatant with the disrespect and appropriation of a movement, @pepsi? Is this a sick joke?! pic.twitter.com/8NS8ynJUdj

According to Ad Age, the agency responsible for this expensive misstep was Pepsi's own in-house agency Creators League Studio. This can, unfortunately, happen when you are using in-house talent. There's a tunnel vision.

People are afraid to speak up and call out a senior's bad idea because it can affect their job or even day to day life at the agency. Drama, vendettas, and politics can plague an in-house environment even on a good day, with good creativity.

When it goes bad, the people that are just there for a paycheck, they'll let it go bad. "Hey don't look at me, I'm just the hands." The blame falls on the creative director and creative leads. I'm not saying that's how this went down. I don't know, maybe they have a great work environment.

All is I know is that they didn't take a step back and use some common sense and taste. I was in-house agency side for 7 years, I know exactly how things can go down.

I've even voiced objections on issues similarly tone-deaf, only to be shot down. Sometimes that's just the way it goes.

A few ideas on how Pepsi could have avoided this:

Kindly look into this: Feed Back for Video