Client Guide: How Much Does Video Cost?

Video cost: Let’s get down to brass tacks and talk about real numbers as it relates to a real-world project. This is pretty much the first thing I get asked by a prospect.

The answer, of course, depends on a myriad of variables, all dependent on one another to determine the full scope of the project. Clients often ask this far too early in the process. They ask before they even know what they want or what they need. So first things first.

Figure out your brief and scope and then come back here and get yourself some numbers to get you in the right ballpark. I put some blood, sweat, and tears into this article, so you don't have to.

All I ask is that you be patient through the few shameless plugs that I inserted. 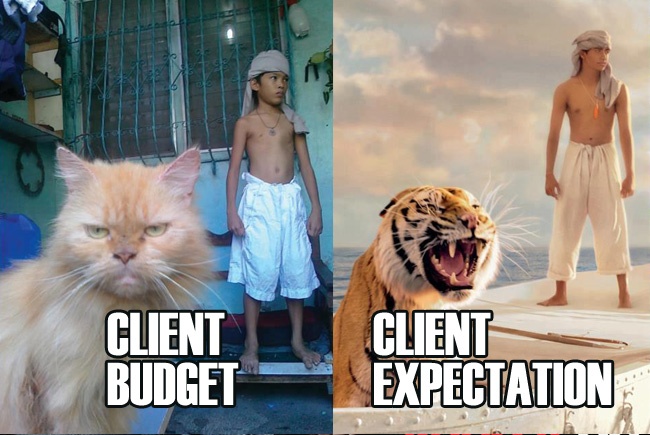 Pro-tip: Don't ask for the price in the first email or else they will think that's all you care about and then they will know you are just going to go to the cheapest place and not consider the value and how it will affect your business.

Think about this before asking about the cost of a video: How much is a customer worth to you? What is your current growth rate? Where do you want it to be? What is the biggest issue trying to accomplish your goal? What is that costing your business? How will this impact your business if you fix this issue? What's that worth to you?

“Motion graphic design work is priced several different ways: by the hour, the day, the finished onscreen second or minute, or as a flat project fee.”

In marketing videos for direct-to-client projects, I'll often price by the results and value that I can bring in.  A simple example of this is if a client is expecting an explainer video to increase their conversions for a consumer to purchase their products or services by 20% or so. That number in dollars is $200K over the next two years, I'll charge 20% of that. $40K may seem like a lot for an explainer, but if it brings you in $200K of revenue, that's an ROI of $160K. That's just good business. Invest $40K, get $160K profit.

I use project milestones to keep the project on track and prevent scope creep and extensive revisions. To me, it's just as important for the client to get a fair deal and get what they asked for as for me to get paid properly for the job.

Video cost can be a little mystifying and somewhat akin to finding out how much a medical procedure is going to cost. There's how much your insurances is going to cover, which wildly differentiates, then there's how much the hospital charges you based on their blue book rate and what they think you can afford. It's frightening, and kind of crazy.

Every place is different and you don't know who to trust. Thankfully there are some standard industry ethical price guidelines that Graphic Artist Guild Handbook (now in its 21st edition) have helped established. It still can vary, but at least it's some place to start.

According to a survey done by the Graphics Artist Guild in 2013, here are the average fee ranges for computer animation based on a finished second. There are 10 basic industry categories to break it down.

Average Industry 2D Animation Video Cost Based on a Finished Second According to Graphics Artist Guild in 2013:

Average Industry 3D Animation Video Cost Based on a Finished Second According to Graphics Artist Guild in 2013:

Note: “Designers who do work that is not part of a work-for-hire agreement may include specific usage rights in their base project price, but the specific rights vary by project. The transfer to the client of all rights to the final artwork is charged at 50 to 200% higher than the base project price.”

On the absolute premium high-end it would run $150,000 for 2D and $180,000 for 3D. And these prices are 8 years old!  These may seem a little high to you, but as with most things you buy, the amount you pay depends on a wide variety of factors. In this case, the style and length of the video are the two most important.

Pricing is also affected by the level of detail, resources available, customization, schedule, and the complexity of the animation. Dropbox famously paid $50,000 for their 2-minute explainer video. Depending on the source, the estimated ROI for Dropbox’s explainer video was between $24 million and $48 million. Now that's a bang for the buck!

I tend to use a hybrid method of 2d and 3d for the explainer videos that I do so the average starting price for a direct to the business client is $15,000 for a 2-minute explainer video, taking anywhere from 6-8 weeks to complete.

This was a video I worked on at Arc Worldwide/ Leo Burnett for Crest P&G. I wasn't privy to the exact cost but I know that there are quite a few hands in it.  There was a producer w/ several PA's, a dedicated audio person, professional VO talent, an internal team, a legal consultant, a creative lead, lead animator & designer & editor (me), and an assistant animator. This probably cost the client anywhere from $35K - $50K.

So something like this is going to cost more than something like the Feeding America video which was me as animator/editor/audio and an art director/producer. It was for a charitable cause so it had a lot tighter of a budget as well, but was also simplified to more a light kinetic type/ infographic/ slide show.

“According to responses from the Guild survey, the average billing rate is $65 to $90 per hour or $500 to $800 per day, although both rates can be much higher.”

A lot of my clients are agencies and post-houses. I know that one famous post-house that I've worked for is rumored to charge around $1,000 per hour of their design department (I'm being vague for a reason: I like this client and I don't bite the hand that feeds!).

I'm not sure if that's an "all-hands-on-deck" scenario or not and depending on the day that can be 8 - 10 designers, so that would make sense. But they also have a tremendous overhead. Much like our industry, costs are constantly in motion and it's all relative to specific circumstances.

There are also additional fees to consider. Have a look at what typical "terms" are for a short contract.

Additional Fees According to Graphics Artist Guild in 2013:

Now you might be able to see why it's important to know what you want before starting to ask about prices. This guide is just scratching the surface about what you can expect in terms of video cost because every situation is completely different and usually requires a custom estimate.

Since these prices are now over 8 years old, (9 if you count when the survey was taken), I expect there to be discrepancies, but at least it will give you a place to start and understand how much a reputable and reliable place is going to charge you.

At the end of the day choosing the right video production company should not just revolve around price but also style, experience, communication, and how much the company is going to work with you to meet your goals and give you the best return on investment.

That being said, everything is open to negotiations. Just like the price shouldn't be everything for you, money isn't everything for video production houses. Maybe there's something in your project that you can use as a bargaining chip to reduce some of the cost. Are you easy to work with? Is your project cool to work on and does it allow for creative freedom?

Does it present interesting new technology challenges or push the tech envelope? Would it be cool as a process case study or showcase piece to a portfolio? Is it high-profile? Could it get them free press or publicity? Is a long-term relationship possible? One of the biggest ways to save is to shift your timeline to the lower part of the quarter.

For instance, May & June are always slow for me for some reason. I'm always willing to give deals during those months.

We're here to help! Send us a quick email to start the conversation and see if we are a good match.

I read the quote below and wanted to ask a question or two. I am a motion designer, based in LA, always interested in getting new and improved rate and/or business info—

Does the quote pertain to people working from home, who have their own overhead of hardware/software/etc? Does this pertain to freelancers who work on site? A studio with employees?

Thank you so much!

“According to responses from the Guild survey, the average billing rate is $65 to $90 per hour or $500 to $800 per day, although both rates can be much higher.”
Excerpt From: Graphic Artists Guild, Inc. “Trade Customs & Pricing Guidelines for Graphic Artists.”

Happy to help. One of the reasons why I wrote that post was in the interest in getting a bit more transparency in our industry for freelancers and clients alike. Having fellow freelancers charging too little hurts just as much as clients only looking for the cheapest solution or not understanding typical costs.

Anyways, I didn’t write the GAG book so I can only speculate and speak from my own experience on the average billing rate. It pertains to freelancer working offsite and onsite, not studios. Also, I would say the experience level is mid to senior. Juniors are on the lower end of the spectrum. Studios are usually higher depending on the project and can either charge on a per finished second or a flat project bid. Sometimes there’s a day rate or hourly but it’s much higher than what a single freelancer would charge. Depends on the studio, client and lots of other variables.

BTW LA is a different beast altogether. From what I understand, since there is so much talent out there rates tend to be a bit lower. The ol’ supply vs demand. That’s mostly anecdotal, though! If you are trying to figure out how to price yourself, Coroflot has a helpful survey that will give average hourly rate per region: http://www.coroflot.com/designsalaryguide/motion-graphics-designer/united-states